Joshua Redman is one of the most acclaimed and charismatic jazz artists to have emerged in the decade of the 1990s. Born in Berkeley, California, he is the son of legendary saxophonist Dewey Redman and dancer Renee Shedroff. He was exposed at an early age to a variety of musics (jazz, classical, rock, soul, Indian, Indonesian, Middle-Eastern, African) and instruments (recorder, piano, guitar, gatham, gamelan), and began playing clarinet at age nine before switching to what became his primary instrument, the tenor saxophone, one year later. The early influences of John Coltrane, Ornette Coleman, Cannonball Adderley and his father, Dewey Redman, as well as The Beatles, Aretha Franklin, the Temptations, Earth, Wind and Fire, Prince, The Police and Led Zeppelin drew Joshua more deeply into music. But although Joshua loved playing the saxophone and was a dedicated member of the award-winning Berkeley High School Jazz Ensemble and Combo from 1983-86, academics were always his first priority, and he never seriously considered becoming a professional musician. 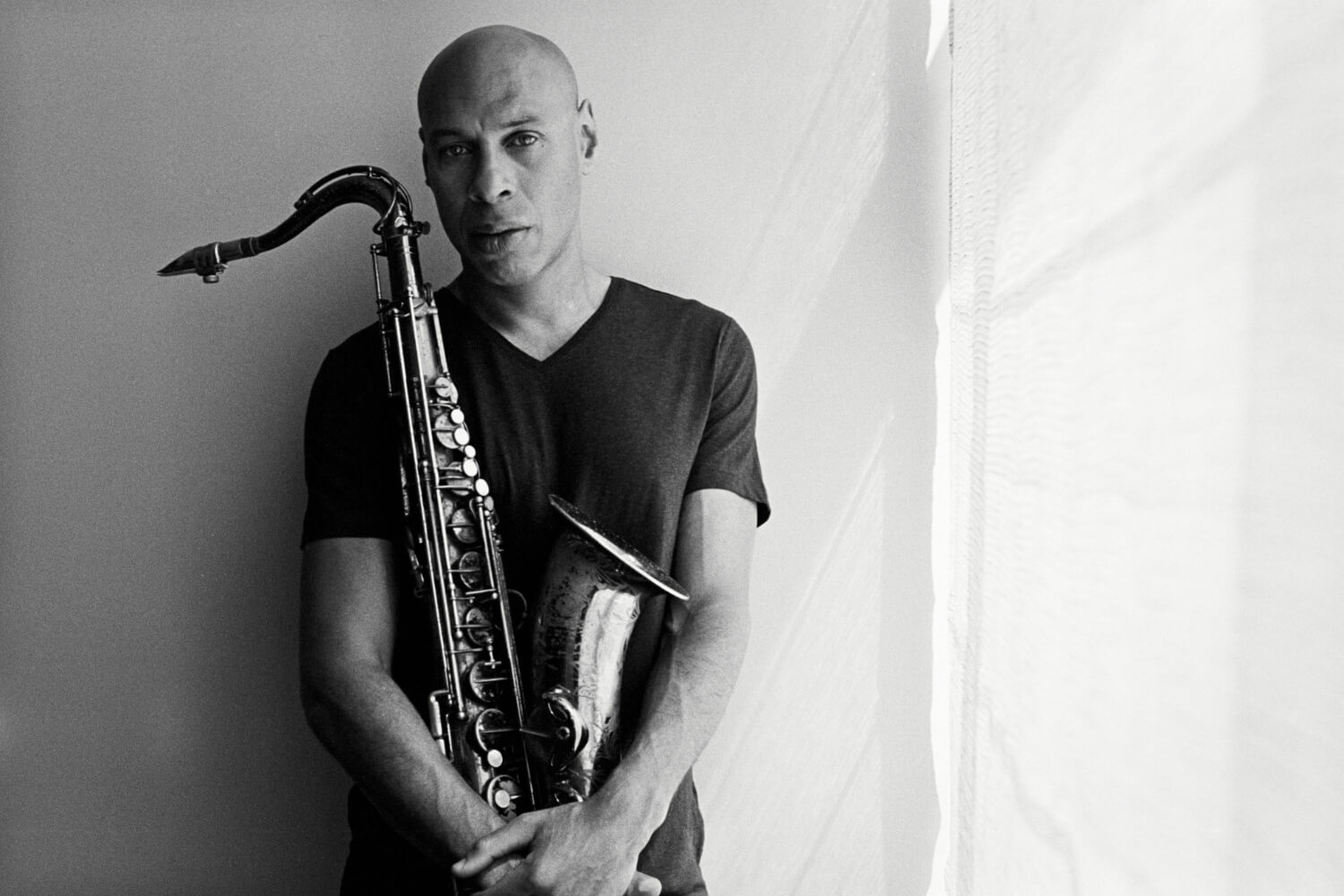 In 1991 Redman graduated from Harvard College summa cum laude, Phi Beta Kappa with a B.A. in Social Studies. He had already been accepted by Yale Law School, but deferred entrance for what he believed was only going to be one year. Some of his friends (former students at the Berklee College of Music whom Joshua had met while in Boston) had recently relocated to Brooklyn, and they were looking for another housemate to help with the rent. Redman accepted their invitation to move in, and almost immediately he found himself immersed in the New York jazz scene. He began jamming and gigging regularly with some of the leading jazz musicians of his generation: Peter Bernstein, Larry Goldings, Kevin Hays, Roy Hargrove, Geoff Keezer, Leon Parker, Jorge Rossy and Mark Turner (to name just a few). In November of that year, five months after moving to New York, Redman was named the winner of the prestigious Thelonious Monk International Saxophone Competition. This was only one of the more visible highlights from a year that saw Redman beginning to tour and record with jazz masters such as his father, Jack DeJohnette, Charlie Haden, Elvin Jones, Joe Lovano, Pat Metheny, Paul Motian, and Clark Terry. For Joshua, this was a period of tremendous growth, invaluable experience and endless inspiration.

Now fully committed to a life in music, Redman was quickly signed by Warner Bros. Records and issued his first, self-titled album in the spring of 1993, which subsequently earned Redman his first Grammy nomination. That fall saw the release of Wish, where Joshua was joined by the all-star cast of Pat Metheny, Charlie Haden and Billy Higgins. He toured extensively with Metheny throughout the latter half of that year. His next recording, MoodSwing, was released in 1994, and it introduced his first permanent band, which included three other young musicians who have gone on to become some of the most important and influential artists in modern jazz: pianist Brad Mehldau, bassist Christian McBride and drummer Brian Blade. A later edition of this ensemble included guitarist Peter Bernstein, pianist Peter Martin, bassist Chris Thomas and Blade. Over a series of celebrated recordings including Spirit of the Moment/Live at the Village Vanguard, Freedom in the Groove and Timeless Tales (for Changing Times), Redman established himself as one of the music’s most consistent and successful bandleaders, and added soprano and alto saxophones to his instrumental arsenal. Joshua’s second acclaimed quartet, featuring pianist Aaron Goldberg, bassist Reuben Rogers and drummer Gregory Hutchinson, was formed in 1998 and made its recorded debut on the 2000 album Beyond. The dynamic interplay and uncommon rapport of this group inspired Redman to write and record his first long-form composition, Passage of Time, which was released in 2001.

A year later, Redman began to channel his jazz sensibilities through new instrumentation and formed The Elastic Band, a flexible, electrified, groove-based trio built on an ongoing collaboration with keyboardist Sam Yahel and drummer Brian Blade. The band debuted on the 2002 releases yaya3 and Elastic. Drummer Jeff Ballard began to play regularly with the Elastic Band later that year, and he (along with Blade and Yahel) played a central role in their next recording, the Grammy-nominated Momentum, which was released in 2005 to inaugurate Redman’s affiliation with Nonesuch Records, and featured a diverse and exciting lineup of special guests.

In 2000, Redman was named Artistic Director for the Spring Season of the non-profit jazz-presenting organization SFJAZZ. Redman and SFJAZZ Executive Director Randall Kline had an idea that The New York Times called a “eureka moment”; the creation of the SFJAZZ Collective, an ensemble distinguished both by the creativity of its members and a unique primary emphasis on composition. Inaugurated in 2004, the eight-piece band consists of a multi-generational cast of accomplished musicians. The Collective’s repertoire features both commissioned works and new arrangements of the work of great modern jazz composers. In March 2007, Redman announced that he was taking a hiatus from both the SFJAZZ Artistic Directorship and the SFJAZZ Collective in order to focus on new projects.

The following month, Nonesuch released Redman’s first ever piano-less trio record, Back East, featuring Joshua alongside three stellar bass and drum rhythm sections (Larry Grenadier & Ali Jackson, Christian McBride & Brian Blade, Reuben Rogers & Eric Harland) and three very special guest saxophonists (Chris Cheek, Joe Lovano and Dewey Redman). On Compass, released in January 2009 (Nonesuch), Joshua continues to explore the expansive trio format, and with a group of collaborators as intrepid as he is – bassists Larry Grenadier and Rueben Rogers, and drummers Brian Blade and Gregory Hutchinson – Redman literally and figuratively stretches the shape of the trio approach; on the most audacious of these tunes, he performs with the entire lineup in a double-trio setting.

Reuben Rogers was imbued with both groove and spirit from birth. Raised in the Virgin Islands by parents who were both ministers, Rogers grew up playing gospel in church while absorbing the calypso and reggae rhythms of the islands. The discovery of jazz in his teens added the elements of freedom and improvisation to those innate qualities, creating the unique chemistry that would make Rogers one of the most distinctive and in- demand bassists in modern jazz.

Rogers’ versatile mastery of both the acoustic and electric bass has led to opportunities on stages around the world alongside some of the music’s most renowned artists, including Charles Lloyd, Wynton Marsalis, Joshua Redman, Tomasz Stanko, Roy Hargrove, Marcus Roberts, Nicholas Payton, Mulgrew Miller, Jackie McLean and Dianne Reeves, among many others.

The range of styles and approaches represented by that partial list reflects the diversity and adaptability of Rogers’ virtuosic and communicative gifts. Whether laying down a window-rattling groove, painting lush harmonic colors or whispering with delicate lyricism, Rogers’s passion and singular voice shine through in any setting.

While he is constantly adapting his always-recognizable voice to new settings, styles and challenges, Rogers’ career is remarkable for the longevity of many of his artistic relationships. He maintains musical partnerships reaching back to his earliest mentors, and enjoys rewarding long-term collaborations with several other artists, including notable tenures with Joshua Redman, Charles Lloyd and the Aaron Goldberg Trio that have lasted for a decade or more.

That blend of long-lasting relationships with novel encounters has led to an entrancing richness in Rogers’ playing, an evolution that is the extraordinary result of deep exploration combined with fresh surprises. Over the last two decades, he’s been featured on more than 100 recordings and countless international tours. In addition, in 2015 he released his first upright bass loop and sample collection, Reuben Rogers Volume 1.

Rogers’ sole release as a leader is the 2006 all-star session The Things I Am, which features Redman, Payton, Goldberg, drummers Gregory Hutchinson and Adam Cruz, percussionist Kahlil Kwame Bell, saxophonist Ron Blake, and guitarists Mark Whitfield and David Gilmore. Embracing new challenges while continuing to evolve the profound bonds he’s formed with his most long-lasting associations has provided such a rich avenue of self-expression that he thrives in his role as, to use his own joking term, “Super-Sideman.”

Born in 1974, Rogers was always drawn to music and dabbled with the clarinet, piano, drums and guitar before discovering his true passion in the bass – a love of low end that he attributes to the earth-shaking sounds of bass-driven calypso and reggae that emanated from nearly every car driving around his native Virgin Islands. His natural abilities were

nurtured by his high school music teacher, Georgia Francis, who would continue to provide support and encouragement even after Rogers left the Islands to study at Berklee College of Music.

He was introduced to jazz by saxophonist Ron Blake and drummer Dion Parson, with both of whom Rogers continues to work in the Afro-Caribbean tinged 21st Century Band, bringing his life and music full circle whenever he returns to the Islands. Both there and around the world, Rogers continues to give back with educational opportunities, leading workshops, clinics, private lessons and master classes to encourage the next generation of jazz musicians.